As if until that moment
nothing real
had happened since Creation

As if outside the world were empty
so that she and he were all
there was — he mover, she moved upon

As if her submission were the most
dynamic of all works: as if
no one had ever said Yes like that

From Accompanied By Angels: Poems of the Incarnation by Luci Shaw, Wm. B. Eerdmans Publishing Company (June 19, 2006). 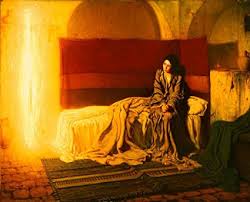 The angel’s entrance (you must realize)
was not what made her frightened. The surprise
he gave her by his coming was no more
than sun or moon-beam stirring on the floor
would give another, — she had long since grown
used to the form that angels wear, descending;
never imaging this coming-down
was hard for them. (O it’s past comprehending,
how pure she was. Did not one day, a hind
that rested in a wood, watchfully staring,
feel her deep influence, and did it not
conceive the unicorn, then, without pairing,
the pure beast, beast which light begot, — )
No, not to see him enter, but to find
the youthful angel’s countenance inclined
so near to her; that when he looked, and she
looked up at him, their looks so merged in one
the world outside grew vacant, suddenly,
and all things being seen, endured and done
were crowded into them: just she and he
eye and its pasture, visions and its view,
here at the point and at this point alone:-
see, this arouses fear. Such fear both knew. 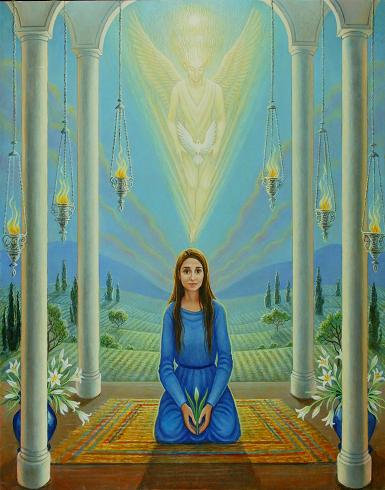 Even if I don’t see it again – nor ever feel it
I know it is – and that if once it hailed me
it ever does –
And so it is myself I want to turn in that direction
not as towards a place, but it was a tilting
within myself,
as one turns a mirror to flash the light to where
it isn’t – I was blinded like that – and swam
in what shone at me
only able to endure it by being no one and so
specifically myself I thought I’d die
from being loved like that. 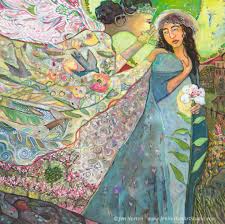 They thought God would refuse.
He always had before. To the Jews
He was as silent
as a glass of cold water,
that is until He bent
down to hear His own daughter.
Like Merlin and Vivian, so shrewd,
one could not tell the difference
between the Wooer and the Wooed.
She, the young plant, broke His indifference.
He never saw His own hand in her making.
She was so perfect, so herself, so still,
that she made His heart thrill
for His own out-breaking.
Then God said Yes, and at once was used
for her intaking.
(Did God get confused
as we, at His first lovemaking?)
But in the end, nothing was able
to come between us and Him.
God became impregnable
and Mary soared like the Seraphim.

Love to hear from you! Cancel reply

Where Change Can Be Dreamed and Dared

Called to Embody the Gospel We Proclaim